Gold is a magical element. It is one of the few metals that can be found in nature without the need to purify it. This means humans have been spotting this glittering material for millennia just by looking down. It is so soft and malleable that it can be beaten into thin sheets, and gold never tarnishes. Something made of gold will still look as stunning 1,000 years after it was originally made. No wonder many ancient cultures had myths about gold belonging to the divine.

Because gold is so good at withstanding the ravages of time, many of the most stunning ancient artifacts are made from it. Here are ten golden objects that show the glories of the ancient world.

Discovery of Troy • The Jewels of Helen • King Priam’s treasure

Heinrich Schliemann is one of the most extraordinary figures in archaeology. He is also one of the most controversial. Most people in the 19th century thought that The Iliad, which described the war between the Greeks and the Trojans, was all pure myth. Schliemann thought it was based on actual events—and set out to find the proof.

Using his self-made fortune, Schliemann funded a dig in modern Turkey at a site called Hissarlik. Almost immediately, he found the ruins of a great city. Schliemann had found ancient Troy. Well, at least he was convinced. What he actually found were the remains of nine cities, each built atop the ruins of the preceding city. One of them had to be the Troy mentioned in the famed work by Homer, so Schliemann dug straight down, hunting for treasure to prove his theory correct and destroying much valuable archaeology on the way.

But Schliemann did strike gold. He found a cache of golden and silver objects, which he named the Treasure of Priam, after the king of Troy in TThe Iliad. Among the most spectacular discoveries were diadems made of hundreds of pieces of hammered gold. These were smuggled out of Turkey (some say in Mrs. Schliemann’s underwear) and taken to Germany. The treasure did not get to rest in peace for long. After the Second World War, it was looted by the Soviets and taken to Russia, where it remains to this day.[1] 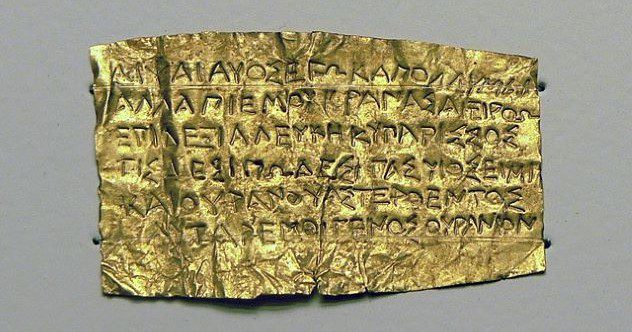 Understanding ancient religious practices around burial can be incredibly difficult. Often all archaeologists have to work with are a few scraps of bone and maybe some grave goods left with the body. In the Classical world, however, sometimes writing was left with the corpse that helps make things explicit.

Sometimes these little texts, called Totenpass (German for “Passport for the Dead”), are written on sheets of gold. The writings they contain are meant to help guide the dead person into the afterlife of their choice. These are found in several religions and cults of the ancient world but are all designed to ensure an eternal and happy life.

One of these strange texts has been described as the world’s oldest book. Made from six sheets of decorated gold that were joined together, it was discovered in Bulgaria and dates from around 500 BC. The writing in the book is in Etruscan, a culture that lived in Italy before the rise of the Romans.[2]

How the Golden Raft of El Dorado Was Crafted

Many European explorers and conquerors were drawn to South America because they dreamed of fabulous golden treasures waiting to be discovered. Most were disappointed. But there were glorious artworks to be found, and gold-working by Pre-Columbian civilizations was among the most sophisticated in the world. Unfortunately, much was lost to the conquistadors and later grave robbers.

However, in the Gold Museum in Bogota, one small object tells an interesting tale. The Muisca Raft, also known as the El Dorado raft, shows several figures riding on a raft. The intricately sculpted piece is thought to model the rites that gave rise to the legend of El Dorado—the Golden One.

The chief of the Muisca people was initiated into his position by being coated in gold dust. He was then rowed into the middle of a lake, where he washed the gold from his body. Further offerings were made of gold and emeralds. The model of this ceremony was found by farmers in 1969.[3]

Boats had a special meaning in the ancient world. With boats, humans were able to conquer the rough and terrifying elements of the ocean. It is no wonder then that several boats have been immortalized in gold.

The Broighter Hoard dates from the 1st century AD and was found in Northern Ireland in 1896 when the objects were plowed up in a field. After they were given a quick wash in the sink at the farmhouse, where it is possible some smaller pieces were lost down the drain, they were sold to the British Museum. It soon became clear the golden objects that were recovered were truly remarkable. Among the finds were a golden torc, a bowl, and a necklace made from three strands of gold. The most interesting piece was a boat made of gold, complete with oars and seats for rowers.

The presence of the boat among the hoard has led to suggestions that it was an offering to Manannán mac Lir—a sea god and lord of the underworld in Irish mythology.[4]

Some hoards were deposited as ritual offerings to the gods, but some served a more practical purpose. In an emergency, it was often handy to hide your treasures in the ground for safety. You could then come back later and retrieve them. Or not, as the case may be. Many hoards are found when the ancient owners never returned for them. And this can allow us to piece together their histories.

The Staffordshire Hoard from England is the largest collection of Anglo-Saxon gold and silver ever discovered. In total, it contains over 11 pounds (5 kilograms) of gold and thousands of objects. Many are richly decorated with inlaid garnets. Dating from the 7th or 8th century, all the objects, except for three religious items, are all related to the military. The one golden sword fitting found at Sutton Hoo was remarkable, but the Staffordshire Hoard contains 50 of them. So, where did all this treasure come from?

Given the quality of the objects and their military nature that were uncovered, it looks like they were looted from defeated enemies following a battle.[5]

Who sought the treasures of the Saka? «Reflections on history»

Nomadic tribes are often thought of as living hard and poor lives. However, the Saka people of the 1st millenium BC were horse lords of the Eurasian steppes who prized their horses above all else. But they also left some of the richest material behind them, especially if one considers the amount of gold found in their tombs.

Over the tombs of their dead rulers, the Saka constructed large mounds that dominated their landscape. Archaeologists sometimes come across vast hoards of golden objects when they open these tombs. When one tomb, known as Arzhan 2, was excavated, they found two human skeletons in the center, 33 other people probably executed to follow the leader into the afterlife, and 9,300 golden objects weighing nearly 44 pounds (20 kilograms).

Other Saka tombs are almost as rich in their grave offerings. It seems people in the ancient world were not immune to the idea of a little grave robbing. When Arzhan 2 was dug up, archaeologists were able to see where an ancient attempt had been made to find the gold—but the early robbers gave up just shy of their prize.[6]

4 Ram in a Thicket

The civilizations of Mesopotamia were among the first to develop cities and writing anywhere on Earth. The city of Eridu was founded around 5400 BC. Over the millennia which followed, the cities between the Tigris and Euphrates rivers developed into powerful states through trade and war. They also became famously wealthy and showed their wealth through a love of gold.

In the British Museum, there is a startling gold, shell, and lapis lazuli object that peers out at visitors. Known as the Ram in a Thicket, it is actually a goat standing against a flowering shrub. It was discovered in the ancient city of Ur and is thought to date from around 2500 BC.

The Ram was found inside the royal cemetery of Ur, inside what is colorfully known as the Great Death Pit, and no one can say for certain what it represents. A pair of these objects were found in the tomb and may have acted as supports for a bowl.[7]

The GOLDEN Graves of Varna! : In Focus

The Varna culture of Bulgaria flourished around 4500 BC and is best known from a single site. The Varna Necropolis was discovered by accident in 1972 and was immediately recognized as a very important ancient monument. The 300 graves of the Varna were the oldest known, where large amounts of gold were deposited with the dead.

Just one of the graves, Grave 43, contains more gold objects than are known from the rest of the world combined for this date. Known as Varna Man, this person was buried with gold disks sewn to his clothes, thick golden pendants, glittering bracelets, axes with handles of gold, and even a golden sheath to put over his penis.

Opinion differs as to who Varna Man may have been. The richness of his goods makes some think he was a ruler. Others think he may have been a goldsmith himself, which may also have been a highly valued position.[8]

Curse tablets are some of the strangest texts from the ancient world. Romans and Greeks were known to engrave their prayers and curses onto pieces of metal, curl them up, and deposit them at special religious sites so that the gods may read them and bring them to fruition. Most of these are written on lead, but some people tried to tempt the gods to do their work by using gold.

In Serbia, examples of curses written on gold and silver were discovered in 2016. Most curse tablets are written in Latin or Greek and say things like “May he who carried off Vilbia from me become as liquid as water,” or “May your penis hurt when you make love.” But these Serbian golden curses are more complex magical charms that are harder to read. The language appears to be Aramaic, but the words are written in the Greek alphabet.[9]

The Mysterious Golden Hats of the ‘Ancient Wizards’ | Ancient Architects

Hats have always been a way to make a fashion statement or mark someone as important. What bolder statement could one make than to make a hat out of gold? Maybe it would be more spectacular if you made it 2 feet (70 centimeters) tall.

Several large conical headpieces made of gold have been found in Europe that date from around 1400 to 800 BC. Their extraordinary size is matched by their intricate decoration, which also hints at their role in rites and religion. Some of the gold hats were carefully buried in antiquity, so they must have had some importance to the people who owned them.

The Berlin Gold Hat is the largest known and acts as a calendar. The golden rays of the sun are mimicked at the top, but in bands running around its length are images of the moon. For those who knew how to interpret these symbols, the hat functions as a 19-year lunar calendar and predicts lunar eclipses.[10]