10 Toys Proving Your Grandparents Were from a Tougher Generation

These days, toy makers are held to stringent safety standards. Thanks to the ASTM F963: Standard Consumer Safety Specification for Toy Safety, U.S. toymakers must follow extensive rules and regulations.

But this wasn’t always the case. Before the government protected kids from things such as figurines covered with lead paint, older generations were handed some wild toys and told to go outside and play. This list presents ten toys that prove your grandparents were from a tougher age in history.

In 1959, Mattel gave the world a toy gun that didn’t need hands to work. The Belt Buckle Derringer Toy Gun could be fired in the usual way while holding it. Or, if you found yourself in a position where you needed to fire a gun while your hands were otherwise occupied, you were in luck. This gun could be attached to a belt buckle and fired when the wearer thrust their hips forward.

What could possibly go wrong with small boys running around with toy cap guns attached to their waist that fired plastic bullets when they waggled their hips? As you might imagine, the guns sometimes went off at unintended times, in unintended directions, although most likely, the intended times the guns fired must have resulted in enough mayhem alone.[1] 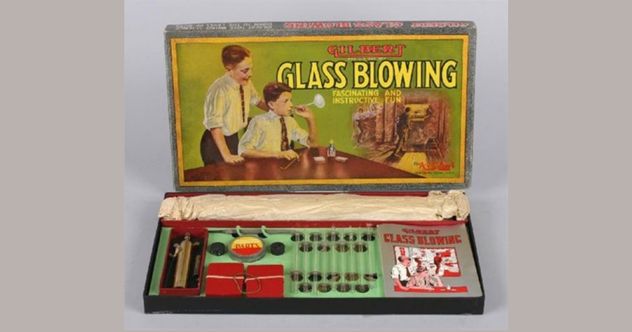 “I wish my young daughter had a kit to shape and form molten glass” is a thought I have never had. However, somebody must have had this thought at some point because a real glass-blowing set for children used to exist.

The A.C. Gilbert Company, which is now out of business, was known for its erector, trains, and chemistry sets—standard kid’s fare, to be sure. However, in the 1920s, A.C. Gilbert offered something special, a working glass-blowing set.

Known as the Experimental Glass Blowing Kit for Boys, the kit contained a blow torch for heating glass until it was malleable, tubes for blowing into and shaping the glass, and a book of “fun” experiments in which children were instructed to hold the heated glass in their hands. For the record, for glass to get hot enough to shape, it has to be heated to at least 1500°F (815°C).[2]

Toy guns were popular back in the day, but the Austin Magic Pistol was a special one that looked like it came straight from outer space. This toy gun from the 1940s had a futuristic look and launched ping pong balls. Sounds pretty harmless, right? Not so harmless when you discover the ping pong ball was fired using an explosive chemical reaction created by calcium carbide and water.

Simply mix water with the provided “magic crystals,” load the gun, and you are all set. However, the “magic crystals” turned out to be calcium carbide, a hazardous substance that turns into a highly flammable gas when water hits it. Each time the Austin Magic Pistol was fired, an explosion occurred in the back of the gun.

They may have been dangerous, but this entry must have been a blast for kids to create. In 1964, Mattel introduced the Thingmaker. It was so wildly popular they released 15 different sets. The set the internet seems to have the most nostalgia for is the Creepy Crawlers.

In an attempt to revive the beloved toy, Mattel recently tested a version using a 3D printer, but sadly, it never made it to market.[4]

This entry was marketed for kids who wanted a sixth finger that both wrote and fired a variety of objects, including bombs, missiles, and messages. Created by Topper Toys, it didn’t have the most attractive design, but kids could wear the toy for fun—’cause what’s not fun about another finger on your hand. And the TV commercial even asked how we got along with only five!

Designed in the 1960s by Deluxe Reading, a toy manufacturer based in Elizabeth, NJ. It produced toys under several brand names, including Topper Toys. On their own, the things the Sixfinger does are not super impressive—anyone can use a pen, right? Or play with a cap gun or other toy gun. But combine this with a weird-looking extra finger held between the thumb and forefinger, and it’s a winner, winner, chicken dinner![5]

Here we go with Mattel again. Mattel’s sonic blaster bazooka gun was what every secret agent-wannabe needed in their life. It was a 34-inch-long (86-centimer) blaster that shot hand-pumped compressed air at such high decibels it caused lifelong hearing damage.

You can still see the vintage ad on YouTube today. The commercial features a young Kurt Russell, walking wearily through a black and white world where he must fire his weapon at piles of leaves and wind chimes to survive.

If you’re thinking, what stopped children from shoving things like dirt and rocks into the blaster and launching them into the air? Well, nothing stopped children from doing that. That is exactly the sort of thing that children will do. This, aside from the hearing damage, is one more reason you can’t buy anything like the Zero-M Sonic Blaster for today’s sheltered children.[6]

Like many toys from the ’60s and ’70s, Clackers were simple. Two balls were attached to a string that a child could smack together to make a loud and pleasing (at least to the child) sound. Banging two balls together doesn’t sound so bad; however, the original clacker balls were made of glass.

What do you think might happen when a small child wildly and violently bangs glass balls together? As you might expect, the glass shattered, sending dangerous shards in all directions. The Food and Drug Administration banned the toys in 1971, leading Sarah Slobin from Quartz to pen a piece where she argues the outcry over the clackers may have been responsible for “sowing the seeds for the helicopter parenting style of today.”[7] 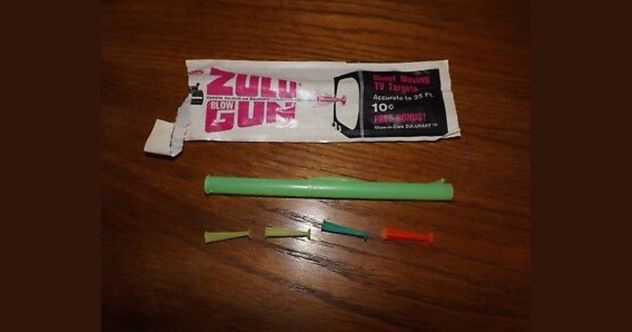 In the 1950s, the Zulu Blow Gun was a favorite among children, allowing them to blow into the gun and launch foam pellets at each other. The problem is when the child sucked in air deeply to be able to blow it out and launch the gun, they sometimes sucked in with the gun to their mouth, launching the pellet directly down their throat rather than into the air.

Blow darts toys are still available today, but modern children are protected from inhaling foam into their lungs by the use of one-way mouthpieces.[8]

Why baby cages were a thing

It’s a tough individual indeed who spent their toddlerhood suspended out a 10-story high-rise window inside a metal wire cage. Baby cages were around mainly from the 1920s to the 1950s, and their purpose was to give parents living in small city apartments a chance to provide their children with some fresh air and sunshine.

The interest in baby cages, which were invented by Emma Read in 1922, most likely stemmed from the 1884 book The Care and Feeding of Children. In this book, a section labeled “Airing” recommended that children get fresh air regularly. Amazingly enough, there don’t seem to be any accidents or deaths from baby cages, but you won’t see any babies suspended from high-rise apartments today.[9]

Although many items on this list are in the category of so-called traditional “boy’s toys,” don’t let that lead you to believe that the conventional “girl’s toys” were any less dangerous. The glass-blowing kit may have been deemed “for boys,” but the Empire Little Lady Stove had exposed burners and could reach exceedingly high temperatures of up to 600°F (315°C), proving the girls of this era were just as hardcore.

The Empire Little Lady Stove was a victim of the first federal safety standard for toys. In 1969, the toy was banned by the National Commission on Product Safety.[10] 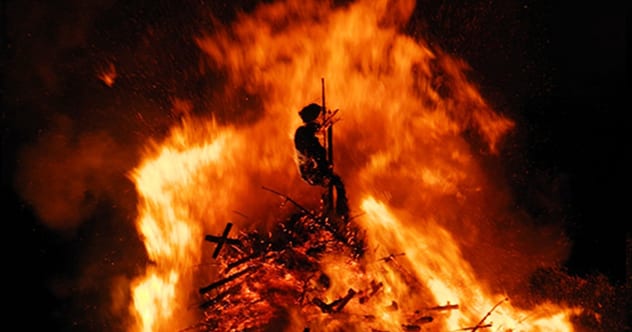 10 Chilling Memorial Sites of the Witches of Europe