By Revatha S. Silva (special thanks to Mahendra Mapagunaratne in Canada)

Rohan (standing, 2nd from right) with the 1979 SL team that toured England for the ICC Trophy and the World Cup, under Anura Tennekoon

Rohan Jayasekera, that lanky Royalist who batted in the top order while keeping wickets in the late 1970s… He was an up-and-coming player in his early 20s then when Sri Lanka was starting her journey in the world of Test cricket.

Jayasekera played for Sri Lanka in three internationals and then left for Canada where he still lives. His memories can revive a fascinating era of cricket in Sri Lanka when the island nation was striving to mark its footprints in the world game as a newborn Test nation.

Q: How it all began after your tremendous school career?

A: After doing well in the Sara Trophy, I was selected to play for the Board President’s XI against West Indies under Alvin Kallicharran in 1977. In Galle, I scored 30 plus runs. Windies had Sylvester Clarke, Malcolm Marshall, Faoud Bacchus, and Vanburn Holder in their ranks. It was a serious pace attack. I remember Bandula Warnapura was hit by Clarke on the head in Galle. It was so nasty that I thought Bandu was dead.

Q: Then you were picked for Sri Lanka?

A: Yes. I was picked to play in the 1979 England tour. There, we had to win the ICC Trophy to qualify for the World Cup which we did. After that, I was in the 1981 Sri Lanka U-23 team for the Gopalan Trophy. It was a very good team that had Anura Ranasinghe, Sidath Wettimuny, Ranjan Madugalle, Ashantha de Mel, Ravi Ratnayeke, Roger Wijesuriya, and Yohan Gunasekera.

Then I was part of the squad for the England tour of Sri Lanka in 1982 for the inaugural Test. I played the first one-day match. After that, I was selected for the Pakistan tour where I played another ODI and my only Test.

Q: But you left the country so soon leaving all that behind?

A: I had already decided to migrate to Canada by the time I toured Pakistan. I was 24 then. In fact, I had to extend my Canada visa to be involved in that Pakistan tour. I decided to leave because I was not sure about a steady cricket career that time. I thought the selectors must have a liking to you if you are to have a stable position in the national team. 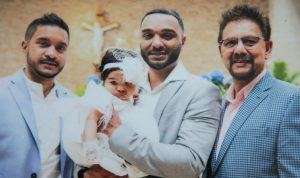 Rohan Jayasekera (on extreme right) with his two sons, Gavin and Dillon, and his grand-daughter

Q: Weren’t you invited to be involved in the Rebel Tour that took place at the end of that year (1982)?

A: It was in that tour that Mohsin Khan first came up with the idea of a Rebel Tour. One day, he met me over dinner and told me about the idea –in a very friendly discussion– that a tour could be arranged to South Africa which was then banned for international sport due to their apartheid rule. I told him I was not interested because I had already planned to come to Canada.

Q: For you, how did that tour affect the development of Sri Lanka’s cricket?

A: I would say the Rebel Tour had mixed results. First, Sri Lanka lost a huge talent in Anura Ranasinghe owing to that tour. Anura was a prolific all-rounder who had a lot of cricket left in him. On the other hand, it allowed a new bunch of youngsters to play for Sri Lanka much earlier (as the seniors who were involved in it received a 25-year ban by the authority then).

Q: How did your playing career continued in Canada?

A: I played for Canada from 1983 to 2006. A lot of Sri Lankan club cricketers and players from the West Indies come here to play. I observe that the West Indians particularly are not involved in the game very seriously here. During the late 80s, Canada had very good team.

This is a very large country and getting a team together is also very tough. There is lack of Test facilities as well. Those factors hindered Canada reaching the Test level. I see it is the Indians who are dominating the game here nowadays.

Q: Your memorable feats in Canada?

A: My best batting for Canada is scoring 145 against Denmark in 1989. I have been named for Canada’s Hall of Fame for Cricket.

Q: How is the life going on nowadays?

A: I live in Toronto and work for the Allegion Company. I have two sons, Gavin and Dillon. Now I’m a grandfather. I played for Canada Over-50 team in the World Cup recently and I now play for the Over-60 team here, which is currently preparing for the World Cup.

Q: Finally, on the present situation of cricket as a whole?

A: Now there are lot more games and more opportunity for a cricketer. Financially too, the situation is much better than it was in the 1970 or 80s. I continue to have my contacts with my cricketing friends in Sri Lanka. I last visited Sri Lanka in 2014, to see “the Royal-Thomian” that year.

Younger brother: Shantha Jayasekera, the middle-order batsman who represented Canada national team in 1994 and 2004 at the International Cricket Council (ICC) tournaments and presently in contention for Canada Over-50 team for the Senior World Cup

School career: Played for Royal First-XI during 1977-79. Played in the annual Big Match against S. Thomas’ in 1976 and 1977, under T.M.S. Saldin and Ashok Jayewickrema respectively. Later played in inter-school Browns Trophy 50-over tournament and for SL Combined Schools

First-class debut: Played for Tamil Union and made a century in his Sara Trophy first match against Nomads in 1977 aged 19

First-class record: Scored 356 runs in eight matches at an average of 29.66, with three fifties, with the top-score being 79 n.o. Took six catches and two stumpings

Internationals: Played one Test, against Pakistan at Faisalabad in 1982, and two ODI, against England and Pakistan in Colombo and Faisalabad, also the same year. In those matches, he replaced Sunil Jayasinghe as the wicket-keeper of SL team

Record: Could make only two runs in the Test he played and 17 in the two ODIs (he batted in only one innings)

* Rohan Jayasekera was part of the SL squad that won the ICC Trophy, held for the ICC Associate Members, in 1979 in England

* SL beat Canada in the finals to win the title

* The victory in that tournament ensured SL qualified for the 1979 World Cup where they beat India by 49 runs in Manchester in the round-robins, one of the most notable victories in SL’s cricket

* Rohan then played in the first-ever ODI to be staged in SL, on 13 February 1982 at SSC, against England led by Keith Fletcher

* The game was the first “official” ODI of SL and, incidentally, the first international cricket match to be aired live on TV in Sri Lanka

* In SL’s reply, Rohan came in at No. 3 and scored 17 runs off 42 deliveries, sharing 64 runs for the second wicket with Wettimuny.

* SL won the next ODI, the second and last of the series, held the very next day at SSC, to square the series 1-1

* Yet Jayasekera was dropped for that game, to be replaced by Mahesh Goonatilleke as the wicket-keeper

* In that 2nd ODI, England chased 216 to win in 45 overs. They did well to be at 109 for no loss at once. Eventually England needed to score 14 in their last two overs, with five wickets in hand. SL triggered four consecutive run-outs and then England needed three to win in the last two balls

* Willis gave a high catch to Ranjan Madugalle off de Mel in front of over 20,000 spectators at SSC and SL won the match

* SL beat England by three runs with a ball to spare

* Three days later on 17 February 1982, SL played her inaugural Test against the same England side at the Oval (SL lost by seven wickets on the fourth day afternoon)

* Rohan was then part of SL’s first overseas Test tour, for Pakistan within less than ten days after they finished the inaugural Test

* Rohan played the third Test held at the Gaddafi Stadium, Lahore from 22 March 1982

* SL went to the Test being 1-0 down in the series. Javed Miandad led the Pakistanis

* Rohan came in to bat at No. 3 in the first innings and was bowled by Imran Khan before opening his account. SL made only 240 all ou

* Rohan scored only two runs in eight ball in the second innings and was again clean-bowled by Imran, who took a match-bag of 14 for 116

* SL were bowled out for 158 to lose the match by an innings and 102 runs. Pakistan clinched the series 2-0

* This was incidentally the debut Test of spin bowler Roger Wijesuriya