Young Australians' hopes of overseas holidays this year could be dashed with the nation's Covid-19 vaccination rollout hitting a major hurdle after the government advised those under 50 not to receive the AstraZeneca jab over blood clot fears.

Australia had been aiming to open its international borders beyond New Zealand from the end of October when the government planned to have every willing citizen receiving at least their first vaccine dose.

But that timeline is now almost impossible to be met following Thursday's announcement the AstraZeneca Covid-19 vaccine - which Australia had purchased the most doses of - was no longer recommended for under 50s, only the Pfizer jab.

The recommendation of the Australian Technical Advisory Group on Immunisation (ATAGI) was made under an 'abundance of caution' of the rare but serious side effects of the AstraZeneca vaccine, which has mostly been associated with younger people.

Most Australians had been expected to get the AstraZeneca jab, which was also being produced locally, after the government ordered 53.8million doses compared to an initial order of 10million doses of the Pfizer vaccine.

Mr Morrison said given his government's overly cautious approach he could no longer guarantee every Australian will be inoculated by the end of October - or even this year - which had been deemed a prerequisite for international travel.

'We expect that this will require some changes to the arrangements we have as part of the vaccination rollout. And this includes when we might expect our first doses, ultimately, to be able to be offered to all Australians,' Mr Morrison said on Thursday.

Australia will now 'recalibrate and re-evaluate' its vaccine rollout as it desperately tries to obtain more doses from Pfizer and clings to hopes deliveries of the 51million doses of the Novovax jab will begin from October, despite the vaccine still in the clinical trial phase.

Department of Health Secretary Dr Brendan Murphy said they were currently unable to say how the setback will impact the country's rollout timetable, such as when citizens beyond the most vulnerable will be inoculated.

Australia's hopes of widespread international travel from the end of October appears in doubt after authorities advised those aged under 50 against receiving the AstraZeneca Covid jab (pictured, a passenger at Sydney airport)

'We will have to replan... how we will deliver vaccines and we'll have to come back at a later stage with better estimates on when things in each phase will be completed,' Dr Murphy said.

Associate Professor of Medicine at the University of Queensland Paul Griffin said he 'can't see how' concerns over the AstraZeneca jab will not slow Australia's vaccine rollout.

'A lot of our supply issues were proposed to be addressed by local manufacturing. And now, while we will retain that, the AstraZeneca vaccine will only be available for people in that older age group,' Dr Griffin told The West Australian.

'So there's a significant portion of the population that I think is still going to be subject to restricted supply of a vaccine. There's been a lot of talk about Novavax (vaccine) coming online, but that's many months away still.'

The government received its advice late on Thursday from ATAGI which promoted the health alert after European authorities confirmed a link between the AstraZeneca jab and rare blood clots.

The United Kingdom also offered people under 30 an alternative vaccine due to the risk, with health experts in that country saying evidence suggested young people are more susceptible to the blood clots following vaccination than older people.

Experts revealed people in their 20s had about a one in 90,000 chance of developing the side effect after receiving the AstraZeneca jab compared to one in 500,000 in the over 60s.

Their increased risk, combined with the fact younger people are statistically very unlikely to fall severely ill with Covid, led to the UK's restriction of the vaccine in healthy 18-to-30-year-olds.

One person in Australia so far has developed the clots after receiving the AstraZeneca jab, a man in his 40s who was admitted to hospital in Melbourne.

But Chief Medical Officer Professor Paul Kelly said the adverse reaction to the jab was so rare it was not picked up in clinical trials.

'At the moment, it seems to be around four to six per million doses of vaccine. It's only been found in the first dose of the AstraZeneca vaccine, usually within four to 10 days after that vaccine,' he said.

'But it is serious and it can cause up to a 25 per cent death rate when it occurs.'

- Australians who have had their first dose of the AstraZeneca vaccine without any serious adverse events can safely be given their second dose, including those under 50

How will this affect Australia's Covid-19 vaccination rollout?

- Rollout plan will be recalibrated and re-evaluated

How the AstraZeneca vaccine works:

- Adenovirus vaccine – To make the vaccine, the common cold virus is genetically modified to trigger it to make the Covid spike protein - which the virus uses to invade cells.

- When the vaccine is administered the patient's immune system attacks the spike protein by building antibodies, priming it to fight off Covid before it leads to an infection.

The recommendations provided by ATAGI were made under an 'abundance of caution' of the rare but serious side effects mostly associated with younger people, Mr Morrison said.

'We've been taking the necessary precautions based on the best possible medical advice. It is not our practice to jump at shadows,' he said.

Professor Kelly said the use of the Pfizer vaccine is now preferred over the AstraZeneca vaccine in adults aged under 50 who have not already received a first dose of that vaccine.

ATAGI did recommend those under the age of 50 who have received their first AstraZeneca jab should proceed with their second, as the medical advice indicates the rare blood clots only develop after the first dose.

Only where the benefit clearly outweighs the risk should an initial AstraZeneca dose be administered to someone under the age of 50.

WHAT ARE THE BLOOD CLOTS LINKED TO ASTRAZENECA'S JAB?

European health chiefs ruled that AstraZeneca's jab should come with a warning that, in very rare cases, it may cause potentially deadly blood clots.

CVST occurs when a vein that drains blood from the brain is blocked by a clot. It can lead to a stroke.

SVT is the same type of blood clot but it occurs in the digestive system.

Both the EMA and their UK counterparts said the clots had occurred alongside thrombocytopenia - low levels of blood platelets.

The EMA, which polices the safety of drugs used on the continent, spotted 169 cases of cerebral vein thrombosis (CVST) and 53 cases of splanchnic vein thrombosis (SVT), from 34million jabs. CVST occurs when a vein that drains blood from the brain is blocked by a clot. It can lead to a stroke. SVT is the same type of blood clot but it occurs in the digestive system

WHAT EXACTLY IS CVST AND SHOULD I BE WORRIED?

CVST is where potentially fatal clots form in the veins that run from the brain.

Platelets cause blood to clot, so while not unheard of, it is incredibly rare for people with low levels to develop clots.

The most severe signs of CVST include stroke-like symptoms such as weakness of the face and limbs on one side of the body, seizures, coma and ultimately death.

But anyone who has suffered headaches, blurred vision, shortness of breath, chest pain, leg swelling, abdominal pain and bruising or pinpoint spots below the vaccination site for four days after a jab should seek medical attention.

HOW COULD THE JAB BE CAUSING BLOOD CLOTS?

European investigators have put forward one theory that the vaccine triggers an unusual antibody in some rare cases, similar to conditions seen in patients treated with the anticoagulant – commonly known as blood thinner – heparin.

Others are looking at whether the cases – which seem more common in women – are linked to birth control pills.

However, at the moment scientists say there is no definitive evidence.

'Ultimately here, the choice is with individual Australians and their doctor. We will encourage Australians to seek out the advice of their own doctor in relation to these issues,' Mr Morrison said.

'This is not a directive. This is not an instruction. This is advice that is being provided to Australians and the broader medical community, who are responsible for administering these vaccines.'

But the government insists citizens aged over 50 are still safe to get the AstraZeneca jab, saying it is 'highly-effective at preventing severe Covid' in that age group.

'They are the most vulnerable group in the country,' Mr Morrison said, pointing out the majority of deaths from the virus in Australia were among the elderly.

'The health advice is that the AstraZeneca vaccine for persons aged over 50 is well advised because, should there be an outbreak of Covid-19, they would be very exposed to that risk.'

Health care workers aged under 50 who were due to receive the AstraZeneca vaccine will now be prioritised for the Pfizer vaccine. (pictured, a nurse receiving her vaccine on the Gold Coast last month)

Health care workers aged under 50 who were due to receive the AstraZeneca vaccine will now be prioritised for the Pfizer vaccine, which will likely delay phase 1b of the rollout.

HOW COMMON ARE STANDARD SIDE EFFECTS WITH ASTRAZENECA'S JAB?

Very Common (may affect more than 1 in 10 people)

swelling, redness or a lump at the injection sitefeverbeing sick (vomiting) or diarrhoeaflu-like symptoms, such as high temperature, sore throat, runny nose, cough and chills

'Important to remember, though, that we don't have community transmission. These healthcare workers are not at significant risk if it means they wait a few more weeks to get their vaccine,' Dr Murphy said.

Dr Murphy acknowledged all vaccines came with adverse effects but authorities were concerned enough to issue the urgent heath advice.

'This is a very, very rare event, and it is a highly precautionary position that Australia can take because we're in a fortunate position with Covid,' he said.

'All vaccines have adverse effects, some serious. Flu vaccines do, the Pfizer vaccine has a risk of anaphylaxis, which we've seen.

'But this syndrome, after all of the work we've done with the UK and Europe, does seem to be a real syndrome, and we now feel that, at an abundance of caution, given that this syndrome seems to occur mainly in younger people for whom the risk of severe Covid is not so great, that there is a basis to have a preferred recommendation for those under 50.'

Dr Murphy sought to assure older Australians there were no risks in having the jab.

'I want to reiterate that we are strongly encouraging those 50 and over to take up the AstraZeneca vaccine - it is a highly effective vaccine at preventing severe Covid. The risk is extraordinarily low,' he said.

Some 20million does of the Pfizer vaccine are expected by the end of the year and the government is confident they will be able to increase their supply to Australia in the near future.

'We're working with them almost on a daily basis to see when they can increase their supply,' Dr Murphy said.

More than 996,000 coronavirus vaccine doses have now been administered, although the government had planned to have four million Australians inoculated by the end of March. 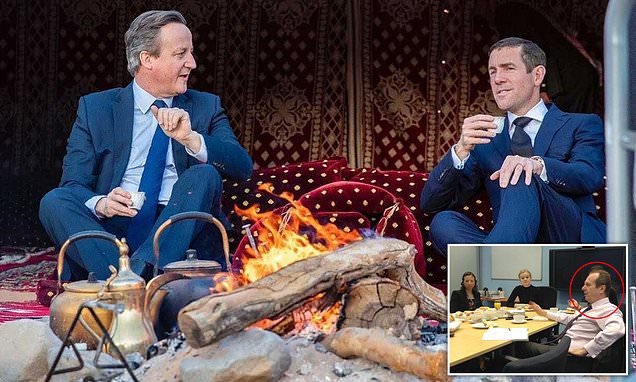 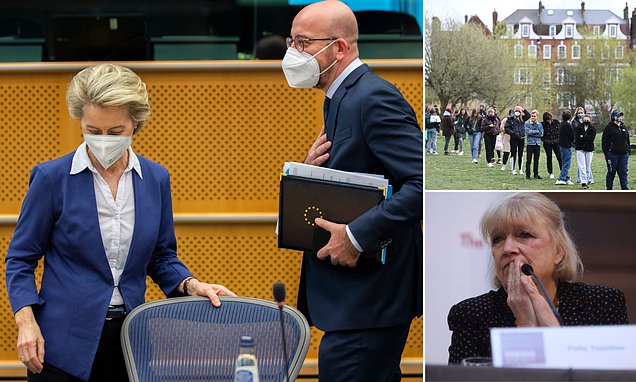 RUTH SUNDERLAND: How I pity the Remainers who have been proved so wrong (and I voted to stay!) 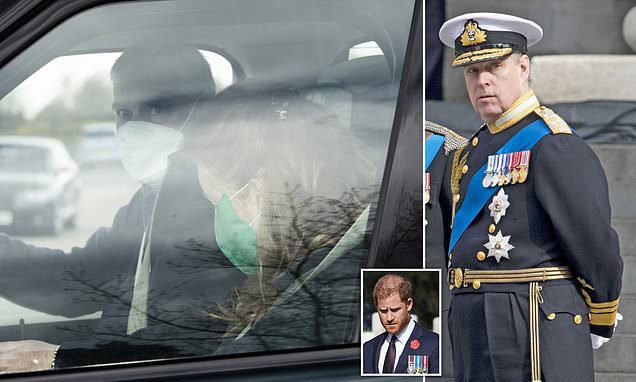 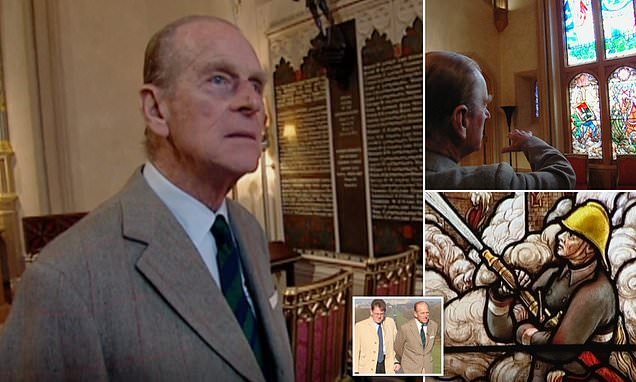