Does Audi's Q5 Sportback have both style and substance? Our first drive

For families who want a practical SUV laced with svelte coupe styling to add some welcome pizzazz, Audi has created the new five-seater Q5 Sportback which we've driven ahead of first deliveries next month.

It's not cheap, with prices starting from a smidgen over £46,000. But if you're in the market for a premium-badged family motor, should this one be at the top of your shopping list?

As showrooms prepare to re-open next Monday (12 April) after the pandemic lockdown, we took an early left-hand drive version on German plates for a Covid-compliant spin around Milton Keynes and the surrounding Buckinghamshire countryside to find out if it's worth the financial stretch compared to more affordable SUV rivals.

Can a coupe SUV really be that practical? We've had an early first drive of the new Audi Q5 Sportback, a svelte family 4X4, ahead of first deliveries arriving in the UK in May

The car we drove was the new Audi Q5 Sportback S-Line 45 TFSI Quattro.

The ‘45’ – the numbering is part of an overly complex system which no-one outside of Audi’s German HQ in Ingolstadt understands, never mind potential customers - is powered by a willing 2.0-litre four-cylinder TFSI petrol engine that develops a handy 265 horsepower, providing enough oomph to accelerate with gusto from rest to 62mph in 6.1 seconds.

That was more than ample performance for the regular sprints on the 70mph dual-carriageway stretches between Milton Keynes’s infamous join-the-dots roundabouts gusto.

It feels big but it’s very nimble with a sporty, sprightly and dynamic performance.

The smooth but energetic automatic dual clutch seven-speed S-Tronic transmission looks after you nicely, but if you want some extra hands-on engagement the paddles on the steering wheel are there to provide it.

Top speed is 149mph, which is more than enough, even if you take it onto de-restricted German autobahns.

One of the first things to capture the Daily Mail motoring editor's eye  was the chunky gear selection for the automatic gearbox. Ray describes it as 'space age' and 'starship' like

The gear selector is a good grip-able and chunky piece of kit that has a sense of space age about it - if feels big enough to command a starship - and is great for slamming over into Sport mode.

For a car this size, claimed fuel economy is a decent real world average of 33.6mpg with CO2 emissions of 192g/km, meaning first year VED tax costs a whopping £1,345 and £155 each year after.

And because all Q5 Sportback models cost more than £40,000, owners will need to pay an additional premium tax rate of £335 a year for years two to five (a total of £1675) on top of the standard rate of VED for the vehicle. Ouch!

The Q5 Sportback isn't cheap. Prices start from just over £46,000 and like-for-like comparisons to the conventional Q5 SUV show a £2,500 premium for the new svelte version

Can a coupe SUV really be all that practical?

As well as a few running cost surprises, the Q5 Sportback also plays tricks with your senses.

You’d think with its sleek, sportier and coupe-like profile, it would be lower than the standard Q5 SUV. In fact it is almost exactly the same height and width, but 7mm longer. It’s aerodynamic shape means it cuts through the air more easily.

The trim levels are: Sport, S-Line, and Vorsprung, plus a launch special called ‘Edition 1’ starting from £46,890.

Depending on the model and trim level, with adaptive suspension you can alter the ride height to suit your needs in up to five stages and by up to 60mm. The rear axle can also be lowered by up to 55mm via a button in the back to make loading easier.

As you would expect there’s a minimalist digital dashboard and screen for sat-nav and all your phone, h-fi and online needs.

The interior is pure luxury, with the inclusion of a large infotainment screen and a slick digital display that replaces the traditional instrument cluster 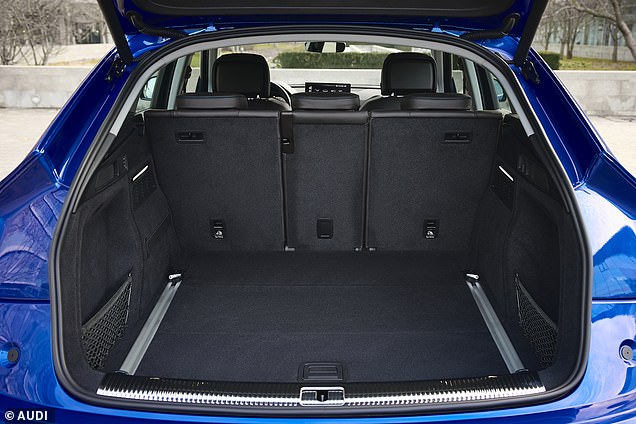 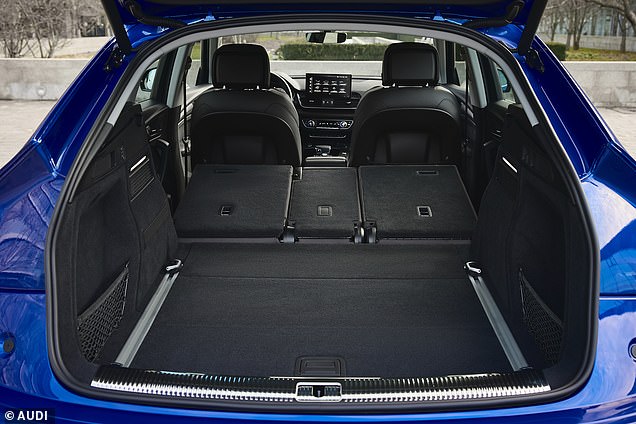 With the seats up (left), the luggage capacity is 510 litres. Rear backrests folded flat and the available space increases to 1

Audi Q5 Sportback: Will it fit in my garage?

With rear seats up: 510 litres

There are also handy switches in the back to let you drop the rear seats easily from the hatch, without having to struggle though the rear doors.

The mark-up for moving from a standard Q5 SUV to a sporty Q5 Sportback is roughly £2,500 at each equivalent level.

A handy moveable rear bench seat, which you can move forward by a few inches to increase boot space, or back to boost rear legroom, is available only on the top of the range Vorsprung trim level.

‘Vorsprung’ means ‘leap forward in German and comes from Audi’s slogan ‘Vorsprung durch Technik’ or ‘A leap forward through technology.’

That slide forward will increase room in the back by up to 60 litres. Slide the bench seat back and it will give you more room to stretch out. And the seats can still be folded in sections 40:20:40. Shame it’s not available across the range.

Audi says the SUV body style remains the firm’s fastest growing segment representing around 4 out of every 10 sales UK sales last year. It reckons the Q5 Sportback will account for around 6.4% of all Audi ‘Q’ or SUV models this year, and about 2.5% of UK sales overall.

Of those Audi Q5 sales by body style, about three quarters (76 per cent) will be standard and about a quarter the svelte Sportback version we drove.

Is it worth the £2,500 premium over the conventional Q5? If style is big on your list of demands, then you might not mind stretching to the Sportback version

In terms of interior quality and luxury feel at this price point, few SUVs of this size compare.

Is it worth the premium on the conventional Q5?

If styling is a big must for you, then a £2,500 hike might be easier to swallow than it is for us.

How much more are you paying in car tax this year? Read our guide