The shortlist for Britain’s best garage has been revealed, and it shows that behind those dull metal doors the nation’s car enthusiasts have created some spectacular spaces, ranging in style from Bond villain hideout to American retro.

The Halfords Garage of the Year competition was launched in June, attracting hundreds of entries.

A shortlist of 20 has now been selected. The winner will be announced in the coming weeks, but until then we can exclusively take you inside six of the favourites likely to take the crown in 2021...

Britain's Garage of the Year: The Halfords award will be decided by British Touring Car racers Gordon Shedden (left) and Daniel Rowbottom (right). We can take you inside six of the nominees for this year's prize

So often a cluttered maze of stuff we haven’t got round to taking to the dump – the great British garage came of age during the Covid-19 lockdowns, with millions of people spending more time tinkering with their motors and dusting off their toolkits.

In fact, two in five people who have garages spent more time in them to relieve lockdown boredom according to Halfords research.

And one in five of those said they spent the time making improvements to the garage itself. DIY, working on vehicles, and even using it as an art studio all also featured as popular uses, as they became a relief during the weeks being stuck at home.

They will receive £5,000 in cash and a £2,000 Halfords Ultimate garage bundle including tools, storage and other motor products, plus a new set of tyres and a BlackVue dash cam, both of which will be fitted for free.

Andy Randall, group chief operating officer at Halfords, said: 'As the operator of more than 370 full-service garages across the UK, we know better than most the value of a well-equipped and well-designed garage.

'Over the course of the pandemic, we’ve spent more time than ever at home and in the garage, organising, tinkering and tidying up. We’ve been amazed at the quantity, quality and diversity of the entries and we look forward to announcing the winner shortly.'

Here are six of the best entries vying for the 2021 title...

1. Edward Beech, Hertfordshire: The Crooked Barn dating back to the 1700s

Edward Beech, pictured, and his wife both quit their jobs and sold their house to embark on a nomad-like lifestyle, using a converted Land Rover Discovery 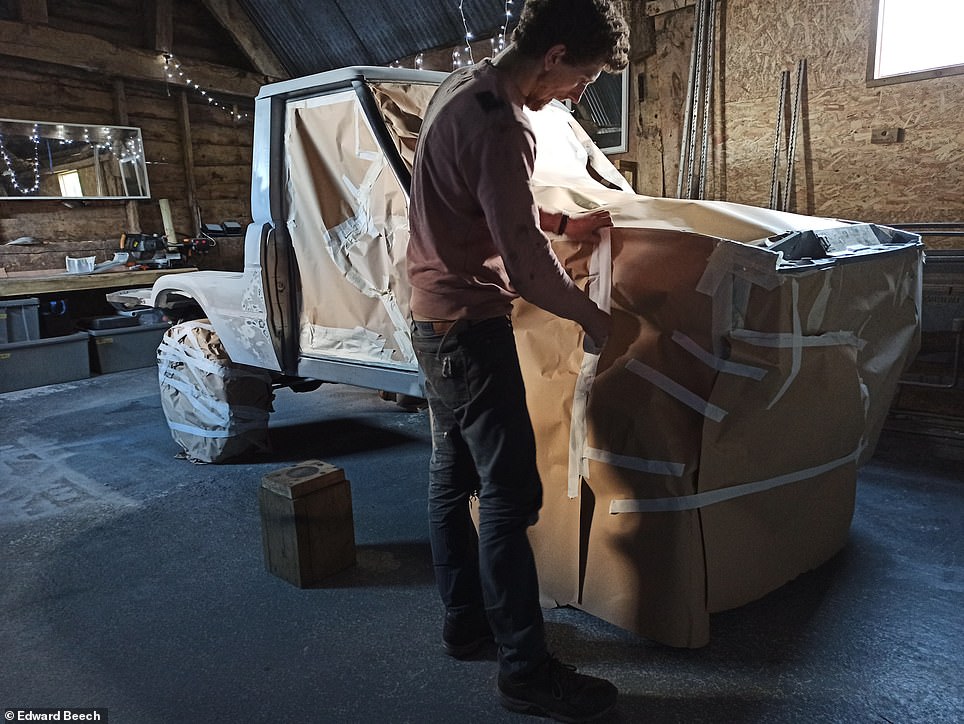 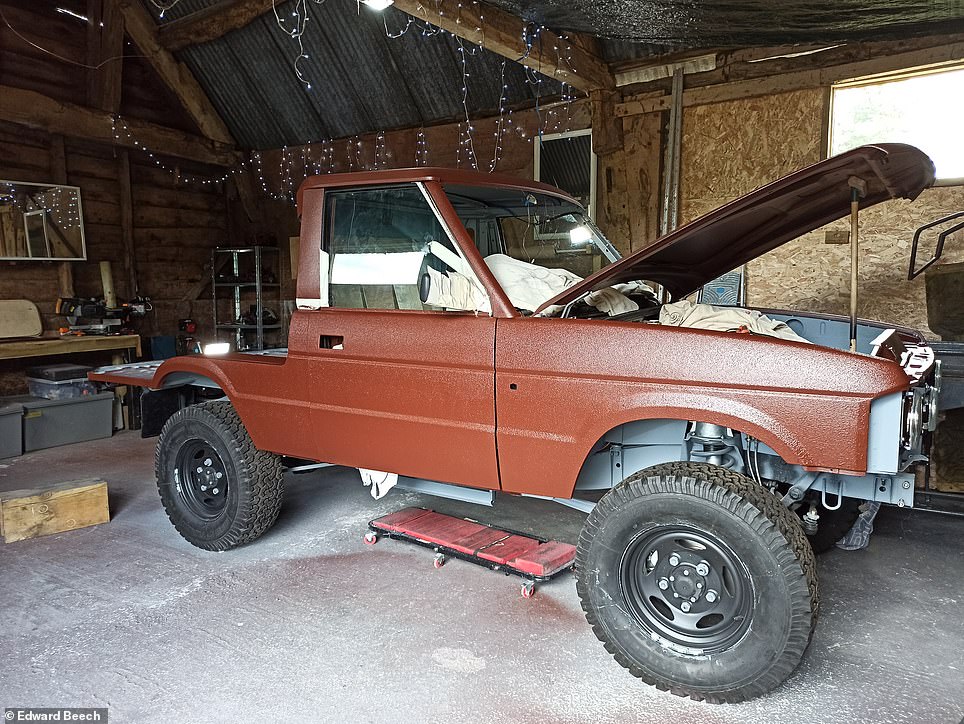 The couple bought Daphne, a 1989 V8 Land Rover Discovery they are converting into mobile living quarters in a 1700s timber barn. Despite the building's unique characteristics, Edward and his wife have utilised the space and kitted it out with essential tools to create their home on wheels

Edward says he and his wife decided to have a change of lifestyle during the pandemic, deciding to ditch their conventional jobs and sell their house in December in pursuit of a simpler life.

However, to do so they required a multi-purpose, do-everything vehicle.

With that intention in mind, the pair bought 'Daphne', a 1989 V8 Land Rover Discovery, which for the past six months the couple have been restoring and converting to a flat bed pick up with removable living accommodation upon it.

They have converted the aptly named Crooked Barn, a 1700s timber barn that is as warped as its name suggests, with the main truss at a 20-degree angle.

Despite the building's unique characteristics, Edward and his wife have utilised the space and kitted it out with essential tools to create their home on wheels.

'I suppose winning this competition would facilitate the next step in life, where ever that may be, even if it is a field in the back end of no where or a removable garage pod to affix to our flat bed,' Edward says.

2. Kurt Bramfitt, Heywood: The NHS worker who built his own lockdown dream

A car enthusiast and DIY extremist, the pandemic sparked Kurt into achieving his dream garage build.

He claims to have been planning and aspiring to build a double garage at the front of the home he has owned for the last seven years, turning it into an amazing space - 'the kind that’s seen on MTV Cribs,' he says.

The NHS worker spent his rare evenings, weekends and days off to create the garage, including the landscaping, foundations, roof, electrics, plastering and decorating. He even created his own YouTube series documenting the build.

The NHS worker spent his rare evenings, weekends and days off to create the garage, including the landscaping, foundations, roof, electrics, plastering and decorating

Kurt has even created his own YouTube channel to showcase the build process for his garage, which doubles as a home gym

'I have poured blood, sweat and tears into my dream garage build but the end results are my greatest reward and I am so proud and privileged to have achieved this,' he explains.

'My dream was to build a place that myself and my little boy could spend many hours and days as he grows up - working on, cleaning, detailing and just enjoying all things automotive.'

With ‘Dad's Garage’ officially established in June 2021, it comes complete with a TV for YouTube car DIY tutorials, a Halfords Tool chest and air compressor.

Nigel Brunt's 'leisure cave' is used to store his collection of high-end motorcycle and cars, all of which are extremely collectible. The garage has four turntables and dedicated corners for his Ferraris, Porsches and Lamborghinis

From a home-build project to the ‘ultimate garage and leisure cave’. Nigel Brunt says he has spent his life collecting cars and motorcycles and has created this bespoke area under his house.

It comes equipped with four turntables so cars can be rotated for easy entry and exit with specific area for his bike collection, a 'Ferrari Corner' and exclusive zone just for his haul of Porsches.

Michelle Reading and her husband embarked on their garage renovation project before the pandemic struck. She says it became a 'life saver' for the couple during the lockdowns

The couple even had a four-post lift installed but says the project remains a 'work in progress', with the walls needing painting and the electrics finishing off

Michelle says the garage she's created with her partner has been a 'life saver'.

She says they were mid-build when lockdown hit in 2020, meaning many of the contents usually stored in a garage were now kept in the house.

'When I agreed to this, I was assured [by her partner] the house wouldn’t be a scrap metal store for long, but I guess I can’t blame him this time,' she said.

It features a mezzanine floor over one half of the garage space that's being used for storage of spare parts  and the workshop area houses all of the tools and provides workbench space for tinkering.

The couple even had a four-post lift installed but says the project remains a 'work in progress', with the walls needing painting and the electrics finishing off.

It will be used for working on Land Rovers but also home improvement projects.

His new dedicated space has a mezzanine floor where Tony holds meetings for the local car club. It also has a ramp and enough storage to keep all his tools

Tony says his new garage area is kept in top top shape, so it can be used for charity events and fundraisers.

'After years of living in an end terrace with a small garage where I had to pull cars out to get to cars and not be able to work on any due to the lack of space, I promised myself that the next garage would be a place to work and enjoy,' he explains.

His new dedicated space has a mezzanine floor where Tony holds meetings for the local car club. It also has a ramp and enough storage to keep all his tools.

Tony, who suffered injuries from a major motorcycle accidents years ago, said his garage helped keep him sane during lockdowns over the course of 2020 and 2021. 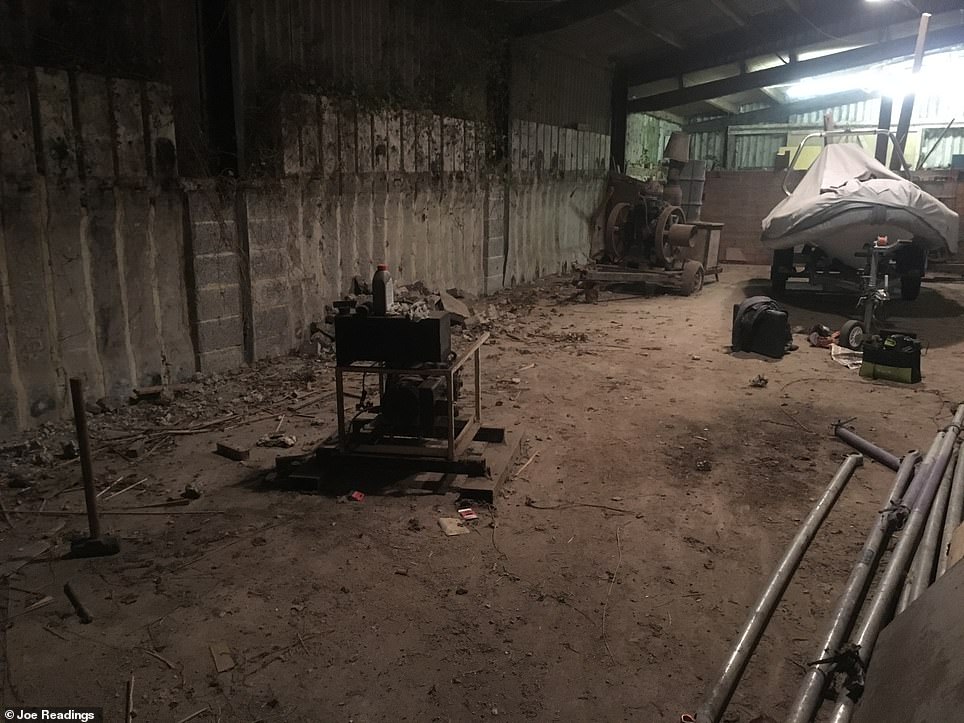 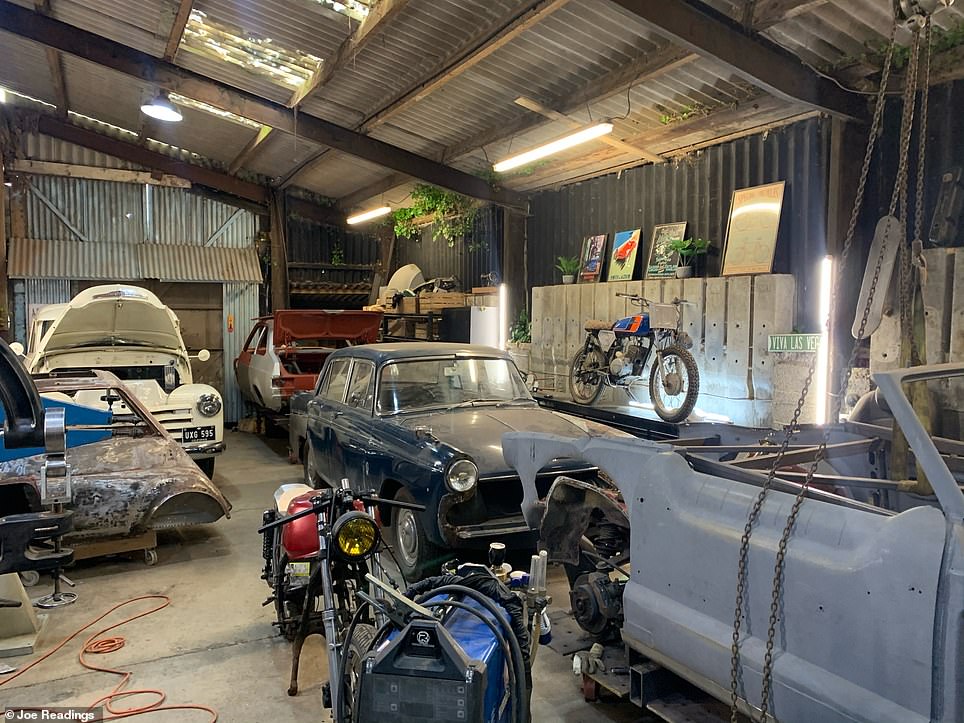 Joe Readings' garage started life as an old grain shed on a farm (left). It has now been stripped out and renovated to become a workshop for vintage cars and motorbikes

Having created the new space, Joe says he has had a wave of demand from people asking if he can help to restore their projects

The workspace certainly has a rustic feel, with this classic trials bike stored on top of a massive tool bench

Joe says his garage started life as an old grain shed on a farm, but since he acquired it the building has been stripped out  to become a workshop for vintage cars and motorbikes.

'It’s given me the opportunities to develop my energy skills along with teaching others along the way and with I being one place it hasn’t stopped me from connecting with people all over,' he says.

Having created the new space, Joe says he has had a wave of demand from people asking if he can help to restore their projects. As a result, he decided during lockdown to make it a full-time job, and says it has allowed him to meet great people as part of the process.