Whether it be getting a sub 10 second time in the 100m sprint or scoring three goals in a soccer match (a hat trick), there are many feats in the sporting world that can draw awe and adulation from fans. But there are a few select feats, a few ultra-rare accomplishments, that truly elevate sporting achievement to new plains of excellence in human endeavour.

The entries on this list are not world or national records – although exceptional, they will not be covered here – rather, these are examples of things that are possible to do but take an incredible amount of mastery, professionalism (and a good deal of luck) to successfully complete. Fewer ‘high scores’ and more ‘points for flare’ and ‘I cannot believe I just saw that!’. Enjoy. 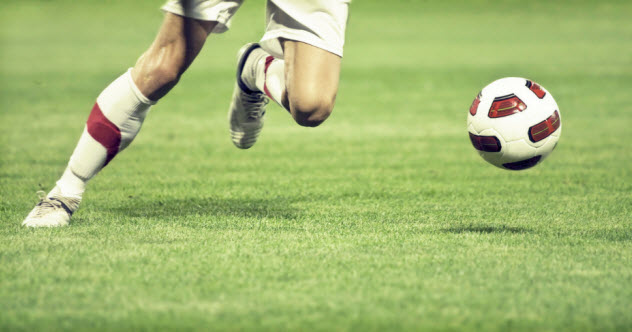 It’s often said that ‘football’ is more a religion than a sport in much of Europe. Indeed, this sentiment may be as true (if not truer) in Latin American, and increasingly, globally. If we continue the religious analogy; if your favourite club end up winning the domestic league, the domestic cup and the top European cup (currently the Champions League, historically the ‘European Champions Clubs’ Cup’), then that is the sporting equivalent of a miracle… or a series of miracles – like Jesus walking on water whilst giving a piggy-back to a quickly resurrecting Lazarus whilst pulling some bread and fish out of his, uh, pockets (did His flowing robes have pockets?)

Only a handful of clubs have completed this—Bayern Munich (Germany) and Barcelona (Spain) have achieved the feat twice, followed by Celtic (Scotland), Ajax , PSV Eindhoven (both Netherlands), Inter Milan (Italy) and Manchester Utd. (England). Titans of European football like Real Madrid, Liverpool and Juventus haven’t done a treble, nor are there any teams from footy-mad nations like France (Paris Saint-Germain, Saint-Étienne, Marseille) or Portugal (Porto, Benfica) on the list.

Rest assured that if you happen to live in a town or a city where your local club manages to win the top domestic league, the domestic cup and the Champions League, there won’t be a drop of alcohol left in your area for about a month. So, get ready Bala Town, next year could be yours! Stock up now.

For those of you who cannot understand how a person can simply remain on a plank of wood with wheels for more than a few feet, the very idea of a person flying into the air from a ramp and completing a 1080? (three full revolutions) and landing successfully would border on science fiction. Add to this the fact that most successful completions of this Holy Grail in extreme sports are all under the age of 15 and you’ve basically got the plot for the next series of ‘Stanger Things’.

Words won’t do this justice. So, just watch the footage of these guys – unbelievable.

8 Getting An Unassisted Triple Play In Baseball

This rare event in “America’s Pastime” is even rarer than watching a player enter the hallowed ‘500 Club’—players who have hit 500 or more home runs during regular-seasons over the course of their career – a feat last achieved in 2015 by Boston Red Sox hitter David “Big Papi” Ortiz. The last person to get an unassisted triple play? Philadelphia Phillies’ second baseman Eric Bruntlett back in 2009.

So, what is this preternatural play? Put simply, it is when an outfield player makes 3 ‘outs’ (rendering an opposition player out of the game for that inning) all without any help from other teammates. Amazing!

Except, it rarely looks amazing. The average fan is often left thinking “what just happened?” The situation and circumstance required to achieve this is fleetingly rare, but completion of this feat doesn’t quite have the same razzle-dazzle as the other entries here (watch the videos for yourselves—meh).

Hang on a sec, sports nerds, before you type: “Lol, did u even do ur research, bro? a Greek Church is the hardest shot in bowling”, let’s talk about this.

A 7-10 split is the hardest shot in bowling, the rarest to pick up and allows those who successfully smash the spare to consider themselves as cool as Otto Mann from The Simpsons, the single coolest character in cartoon history.

So what is a, a ‘Greek Church’, and why is there conjectural disagreements as to the ‘difficulty’?

Data analysis suggests that the ‘Greek Church’ (pins 7,4,6,9 and 10 left on the right or 4,7,8,6 and 10 on the left) is converted less than the 7-10 in pro-bowling. But this boils to strategy – if you miss the spare on a ‘Greek Church’, you’ll risk dropping serious points. If you land a 7-10, fans will write songs about you, fan you with palm fronds and feed you peeled grapes. So which is rarer? Technically, the ‘Greek Church’. Which is cooler? The 7-10, by miles.

The Longest Ever Kicks at Goal

Rugby is a tough old game. One of the toughest skills, if not the most physically tasking in rugby, is the goal kicking. Some shots at goal are easy enough, a few yards out right in front of the posts – although, even then, not every kick is landed.

When a penalty is awarded, the recipient team can opt for a shot at goal. Successfully landing the kick scores your team 3-points (5 points is awarded for a try – the equivalent of a touch-down in American Football, and 2 points for the following conversion). A penalty kick is taken from where the infringement took place. Sometimes, teams will opt for a shot at goal from quite a way away from the posts, and it’s always impressive to see. But some kickers, a rare breed of half-human, half-bronco players, possess actual steel pistons rather than leg muscles, and can kick a rugby ball incredibly far.

The furthest recorded penalty kick was scored by Welshman Paul Thorburn in a match against Scotland back in 1986. Given that the ‘kicker’ is not a specialist position brought on just for that role (old Paul had to do all the running and tackling that the other 14 men on his team had to do) and given that the balls themselves were a good deal heavier back in the 80s, this 64.2meter kick will go down in history as one of rugby’s most amazing achievements. But whenever a player lands a shot at goal from over 50, you can guarantee that the crowd will go wild.

Will someone else be able to performe Produnova vault as Elena Produnova?

This type of vault is so dangerous that it is actively discouraged. As a result, it is rare. The danger-factor, the active discouragement plus the actual difficulty means that seeing a gracefully landed ‘Produnova’ would be like seeing Halley’s Comet passing by a lunar eclipse whilst Jupiter and Saturn are aligned.

The vault consists of a front handspring onto the long vaulting horse followed by two tucked front somersaults. It is commonly referred to as a “Produnova” after Russian gymnast Yelena Produnova, the first woman to successfully land the move in 1999. It is also called “the vault of death” … yikes. Many have tried it, many have injured themselves in doing so, making the choice a highly controversial one for any athlete to make. You see, even if you land the move and stumble around like a drunken sailor after 40 shots of navy-grade rum, you’ll get credit for the landing by the judges, thus securing a super high score despite the poor execution. This has led to many women attempting the vault, only to land awkwardly, risking serious injury and even death.

In this regard, this entry may be purposely rare for a very good reason.

4 Become A “Quadruple Champion” In Boxing

Manny Pacquiao, Roy Jones Jr, Roberto Durán, Oscar De La Hoya, Thomas Hearns are all “once-in-a-generation” type boxers. They also share one amazing feat – they have all who have won 4 (or more) world titles in different weights and/or across different sanctioning bodies.

It’s hard enough to win a single world title – what sport could be considered more taxing for one’s health than boxing, still the most ardently followed and participated combat sport? – but to be so dominant as to take on all comers from different sanctioning bodies, and then to do it once more at a different weight? These warriors’ dominance truly ranks amongst the most incredible feats attained in sport – rare, gruelling, bloody and beautiful to behold.

3 Become a Yokozuna In Sumo Wrestling

Put it this way—the UFC, mixed martial arts’ premier franchise, has had 29 different Heavyweight and Light Heavyweight Champions since the competition began in 1993. From around the year 1600 until today there have been only 72 Yokozuna.

There is another key difference beyond their infrequency – Yokozuna are never demoted. Once you attain the rank, you are a living symbol of the sport itself, only retirement or death can relieve you of the title.

Of the legends that gained this highest honour, only 6 have been from outside Japan, and all these guys taking the title after 1993. One Hawaiian, one from American Samoa and 4 from Mongolia. There are currently 2 Yokozuna participating in sumo today – Kakury? and Hakuh?. The latter is widely considered the greatest sumo wrestler of all time.

Whoever first thought tapping a bunch of hard balls onto other balls with the tip of a stick, all on top of a fabric-covered table, having to proceed through a colour specific pattern in order to win, was simply a madman. And a genius.

The table is huge. The potting-order one must follow (red, colour, red, colour until all the reds are gone, then yellow, green, brown, blue, pink and end on the black) is devilishly hard to master. This is what makes hitting a 147-point ‘maximum break’ – an unbroken chain of shots that clears the table, scoring the maximum points tally for each ball sunk—so implausible, save for the most skilled players.

The first recorded 147-point break was in 1934, completed by player named Murt O’Donoghue. It took another 48 years for a wider audience to witness such a feat, when Steve Davis completed the first televised max break in 1982. But the so-called ‘Maximum Break’ can, in theory, be topped.

If the ref signals a foul, the next player can treat the coloured balls as reds, thus adding an extra ‘point’ to the table. This also means that the next shot, aimed at a coloured ball, could be 7 more free points (if you sink the black). After this, the player could go on to complete a traditional 147 – meaning a 155 break could occur. It never has… in an official competition.

One man has done it, though, in a witnessed practice frame. Jamie Cope scored a total of 16 reds and 16 blacks, a total of 155, the true maximum possible, back in 2005.

Surely hitting one little ball into one little hole can’t be as hard as the previous entry? How many more balls hitting other balls into different holes is that? A 147 in snooker must be way harder than getting a ‘condor’ in golf, right?

Put more simply, a ‘condor’ is a score of 4-under par. This feat is only achievable on a par-5 (or longer) hole, which are usually the longest, hardest holes on any given course, making this achievement incredibly rare.

The first recorder ‘condor’ was struck by Larry Bruce in 1962, when he hit a hole-in-one on a par-5 hole at the Hope County Club in Arkansas. There have been 4 further ‘condors’ scored—never at a professionally sanctioned course and never at a major tournament. You have more chance seeing, catching, barbecuing and eating a ‘critically endangered’ Californian Condor than seeing a golfing ‘condor’… that’s not a dare, by the way. Don’t try this, Californians.

About The Author: CJ Phillips is a writer, actor and storyteller living in rural West Wales. He is a little obsessed with lists.

The Bare Minimum That Everyone Should Know About Ramadan

How Much Money Can You Really Make on Substack?

How to Keep Attackers From Locking You Out of WhatsApp